Want to Work With Me?

Ambitious project, possibly first of its kind headed by a woman, will present initial completed volume on April 5 at ceremony hosted by the country’s president.
Anna Momigliano 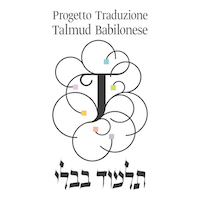 In 1553, the authorities in Rome burned all the Talmuds they could find in a Counter-Reformation crackdown on Jews. But now, nearly half a millennium later, the Talmud is once again being translated into Italian in an ambitious project funded by the Italian government.
The first translated volume, the Rosh Hashanah tractate, will be presented on April 5 during a ceremony in Rome hosted by Italian President Sergio Mattarella. The book is being published by La Giuntina, a company that has specialized in Jewish texts since 1980, and will be available in bookstores the same day.
“Publishing the Talmud is a great honor, but also a very hard job,” said La Giuntina’s Shulim Vogelmann, in an email interview with Haaretz. The Talmud, given its length, challenging language and unique format – in which primary text and commentary dance around each other – is considered particularly difficult.
The translation project began in 2010, when Clelia Piperno, a law professor at the University of Rome, approached the Italian Ministry of Education, Universities and Research with the idea, and then-Education Minister Mariastella Gelmini agreed to allocate 5 million euros ($5.6 million) to the project.
“The Talmud is a vast source of knowledge and we wanted it to be available for everybody,” Piperno told Haaretz via telephone. She noted that the Talmud is the first example of the simultaneous presentation of written law and its related commentary in history, and that having it translated into Italian “would enrich Italy’s culture.” Seventy translators and 20 additional researchers – including computer programmers, linguists and rabbis – worked relentlessly on the project, which involved the Institute of Computational Linguistics, a public institution at Italy’s National Research Council, and the country’s Union of Jewish Communities.
Piperno led the project, while Rome’s chief rabbi, Riccardo Di Segni, served as chairman. “It’s probably the first Talmud project headed by a woman, and it was great working with a rabbi who wasn’t afraid of working with women,” Piperno said.
She couldn’t offer an estimate as to how long the whole translation will take, when the next volume will be completed, or how many volumes will ultimately be printed.
“It took Adin Steinsaltz 50 years to complete the job,” she said, referring to the Israeli scholar who began translating the Talmud into modern Hebrew in 1965 and completed the work in 2010. “But we’re working faster [than Steinsaltz] because we have very innovative software.”
In addition to Steinhaltz’s translation (parts of which were subsequently translated into English), the Italian project follows only a few other major translation efforts. These include the ArtScroll Talmud, the most recent American translation, which began being introduced in 1990.
What makes the Italian project unique is that it is entirely a digital effort, with new software that was designed specifically for it.
In order to allow several translators to work simultaneously on such a complex text and let them exchange inputs and feedback in real time, researchers at the Institute of Computational Linguistics created a software program called Traduco (Italian for “I translate”).
Traduco is “a collaborative Web environment” designed to support the simultaneous work of several translations on particularly complex text. Originally designed for the Talmud, Traduco could be extended in the future “to ensure the translation of other texts and other languages,” said one of its creators, Andrea Bellandi, in a statement on the Institute of Computational Linguistics’ website.
La Giuntina’s edition of the Talmud features Hebrew and Italian text on each page, with the Hebrew text following the standard printed Talmud format used in most yeshivas.
“We really wanted to have a Hebrew page that those familiar with the Talmud could relate to,” said the project’s art director, David Piazza, in a telephone interview. “But we also wanted to make the text as easily understandable as possible, so we added punctuation and niqqud,” he added, referring to the system used to represent vowels in the otherwise vowel-less Hebrew written language.
Piazza said the main audience for the publication is Italian Jews who are not familiar enough with Hebrew to read the Talmud in that language, as well as non-Jews interested in studying it.
http://www.haaretz.com/jewish/news/.premium-1.711344

This website uses cookies to improve your experience while you navigate through the website. Out of these, the cookies that are categorized as necessary are stored on your browser as they are essential for the working of basic functionalities of the website. We also use third-party cookies that help us analyze and understand how you use this website. These cookies will be stored in your browser only with your consent. You also have the option to opt-out of these cookies. But opting out of some of these cookies may affect your browsing experience.
Necessary Sempre abilitato
Necessary cookies are absolutely essential for the website to function properly. These cookies ensure basic functionalities and security features of the website, anonymously.
Functional
Functional cookies help to perform certain functionalities like sharing the content of the website on social media platforms, collect feedbacks, and other third-party features.
Performance
Performance cookies are used to understand and analyze the key performance indexes of the website which helps in delivering a better user experience for the visitors.
Analytics
Analytical cookies are used to understand how visitors interact with the website. These cookies help provide information on metrics the number of visitors, bounce rate, traffic source, etc.
Advertisement
Advertisement cookies are used to provide visitors with relevant ads and marketing campaigns. These cookies track visitors across websites and collect information to provide customized ads.
Others
Other uncategorized cookies are those that are being analyzed and have not been classified into a category as yet.
ACCETTA E SALVA